Alert Level: Low
Please note that some of our website online services and online payment systems will be unavailable on February 11 and 12 due to scheduled website maintenance.  We apologize for any inconvenience this may cause.   Read More
Alert

Alert Level: Medium
The forecasted temperatures overnight will be at or below 1° C. As per the extreme weather act, directed by the Province of British Columbia, the Extreme Weather Response (EWR) program is in effect and additional EWR shelter beds will… Read More
of 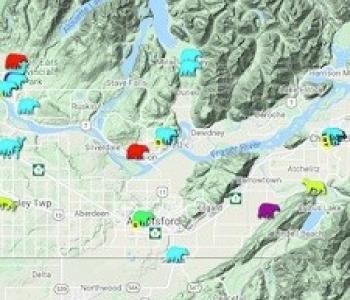 The Wildlife Alert Reporting Program (WARP) is a program developed by WildsafeBC to enable the public to view reports regarding wildlife made to the BC Conservation Officer Service at 1-877-952-7277.

Abbotsford is home to bears, cougars, coyotes, deer, raccoon, skunks, crows, pigeons and many other wildlife.  This is why we find these animals in our neighbourhoods while they are seeking out food or shelter.

Help us keep wildlife wild and your community safe by responsibly managing your waste and other attractants. The best way to keeps bears and other wildlife safe is to not attract them to areas that are frequented by people. The most reported attractant that brings black bears to urban areas is curbside waste, accounting for 46% of calls received by the Conservation Officer Service for the Fraser Valley in 2019.

Wildlife sightings and encounters with bears, coyotes, and cougars should be reported immediately to the Conservation Officer Service reporting line at 1-877-952-7277.

How Wildlife is Supported in Our Community

Management of wildlife in Canada is shared by the federal and provincial governments, with additional support provided by non-profit organizations and municipalities. Keeping the community safe is a shared responsibility – from proper management of curbside carts, waste, fruit trees and other food sources to protecting pets, children and the community from aggressive wildlife.

Many wildlife encounters in our community can be prevented by responsibly managing waste and other attractants. Securing attractants is the single best way to keep people safe, prevent property damage, and avoid bears and other wildlife having to be destroyed or relocated.

The best way to keep wildlife safe is to prevent them from gaining access to attractants – this includes more than just proper management of curbside collection carts and waste.  There are many other attractants that can bring bears and other wildlife into urban areas.  See below for tips on how to manage other common wildlife attractants and help keep wildlife and our communities safe.

A number of resources are available from the the federal and provincial governments, and non-profit organizations.