Alert Level: Medium
The forecasted temperatures overnight will be at or below 1° C. As per the extreme weather act, directed by the Province of British Columbia, the Extreme Weather Response (EWR) program is in effect and additional EWR shelter beds will… Read More
of 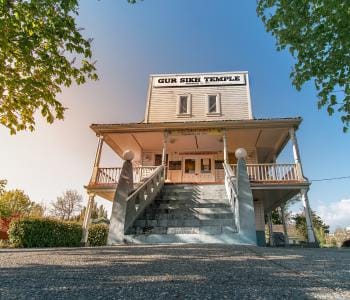 The Gur Sikh Temple, built in 1911 is the oldest Gurdwara in North America and is on the National Register of Historic Places.

Abbotsford has a rich and diverse history and heritage services are an important part of sharing this history and enhancing community identity.

Approximately 15,000 years ago the Cordilleran Ice Sheet began to recede and split up into smaller pieces, however it was not until some 11,300 years ago that the land was re-shaped into its present contour and the Sumas Glacier began to feed into the mighty Fraser River. Since then, this River has been the core of life in the Fraser Valley, as the landscape, flora and fauna shaped itself to fit all around it. The Matheqwí First Nation, Semá:th First Nation, and Leq’a:mel First Nation, who are part of the Stó:lō Nation (People of the River), have lived in S’ólh Téméxw, the Fraser Valley, for at least 10,000 years, or time immemorial and are fundamental to Abbotsford’s history and future.

In 1858, the gold rush brought miners to the area. European and Sikh settlers followed with the establishment of the Clayburn Brick plant. The first Sikh immigrants began to arrive in 1905 with aspirations to acquire land and farm, and work in the forest industry, almost all at the Abbotsford Lumber Company. The Gur Sikh Temple (built in 1911), recognised as a National Heritage Site, is the oldest existing Sikh temple in North America.

The next immigrants were Dutch Mennonites, many of whom come from a long line of settlers who had spent the preceding 200 years in Prussia and Russia after leaving Holland and Switzerland before coming to Canada. The Dutch Mennonites came to settle and farm the fertile and prolific lands. This rich legacy lays a strong foundation for Abbotsford today. Abbotsford’s history is polarizing, as it is both old and young. In 1905, the Clayburn Company built Clayburn Village, BC’s first “company town”, to provide employee housing and services. At that time, Abbotsford, was part of the District of Matsqui, BC. Ninety years later, following amalgamation of Abbotsford and Matsqui in 1995, Abbotsford became the third youngest incorporated municipality in the province.

Cultural Heritage not only includes built heritage sites such as monuments and historic buildings, but also cultural traditions, practices and values. These intangible cultural heritage assets are represented in a multitude of ways from traditional storytelling, place making, and performing arts, to social practices and festivals. There are organizations, community groups, cultural communities, Indigenous groups and individuals who all have stories to tell.

Today, Abbotsford is home to its own university, the University of the Fraser Valley, with over 15,000 students enrolled annually. It is the fifth largest municipality in British Columbia with a population of over 133,000 people, including the third highest proportion of visible minorities among Census Metropolitan Areas in Canada. We have become the Hub of the Fraser Valley, a place with its very own delicious flavour.