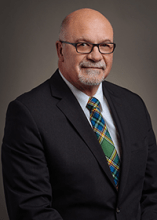 Born in Gravelbourg, Saskatchewan, in 1953, Les grew on a farm near Swift Current and then moved to a small town north of Saskatoon for four years. After graduating from Bedford Road Collegiate in Saskatoon, he attended one year at Lakehead University in Thunder Bay, Ontario.

Les moved to BC in 1974, where he started work with the District of Matsqui in the Parks and Recreation Department. Because of his farming background and familiarity of equipment, Les began operating a variety of equipment throughout the years, especially in the City’s Roads and Sanitation Department. Les has served the District of Matsqui/City of Abbotsford for 44 consecutive years.

Community involvement and giving back to the community is important to Les. He has enjoyed coaching kids both fastball and life skills, and he has officiated basketball for over 40 years in the Fraser Valley Basketball Officials Association.

Les was elected to Council in 2008. As a city councillor, Les’ goal is to be a significant voice representing all residents in Abbotsford. Les has become particularly interested in mental health and substance abuse and has furthered his understanding through attending the National Council for Behavioral Health Conference. He also has a special interest in issues related to traffic and transportation and is enjoying learning about the First Nations culture and developing a stronger relationship with First Nations.

Les and his wife Elaine have been married for 40 years and have raised two sons. Darnell and his wife Christina have four children. Darnell now lives in Yarrow, serving as a pastor after moving back from the Philippines where he worked for Mennonite Church Canada as a peace builder, earth bag builder, and pastor and lead storyteller at Peace Church. Tyson is married to Kim and they have twin boys. Fastpitch has been a big part of Tyson’s life, and he is giving back to communities through his expertise in pitching and strength and conditioning. He has been part of Team Canada’s Fastpitch Team and development roster.