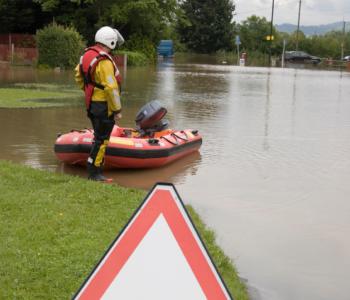 Depending on the emergency, you can also check provincial channels for information. EmergencyInfoBC shares information about large emergencies that may require support from the provincial government.

Floods are common in BC and can happen at any time of year. The most severe floods usually occur in spring and early summer due to heavy rain and melting snow. They can also be caused by storm surges, ice jams or damage to structures like dikes or dams.

In some areas of BC, climate change and related extreme weather events have increased the flood risk. Rising temperatures, changing freeze-thaw cycles and rising sea levels can all contribute to flooding.  Review the information below and ensure you are prepared in the event of a flood.

Seasonal weather during the snow melt season is a critical factor in determining the size of freshet, and whether or not flooding will occur. Intense or prolonged rainfall and extreme temperatures are important factors that can lead to larger freshets.