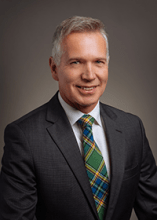 Ross was born and raised in Abbotsford. His maternal great-great grandparents were the Smith and Adams families who were some of the original settlers of the Ridgedale area of Matsqui Prairie. His grandparents on his father's side were Mennonite immigrants from Russia who came to Canada in the 1920's and eventually settled in Abbotsford in 1951.

Ross previously served on the District of Abbotsford Council from 1986 to 1990. While serving on the District Council, he helped initiate the Business Improvement Area legislation that established the Abbotsford Downtown Business Association. He left politics in 1991 to work with Youth with a Mission (YWAM) in Hong Kong. Along the way he had the opportunity to work with Teen Challenge in Macau and also taught English at Shenzhen University in China for a semester.

Upon returning to Canada, he eventually purchased his family's business, Hub Motor Service (Siemens Garage Ltd.), established by his grandfather in 1954 in Downtown Abbotsford.

Ross understands the unique role that small businesses play in building a strong and engaged locally based economy and is excited about opportunities to help these businesses continue to thrive.

Ross is also passionate about refugee relief work, welcoming refugees into the community, and helping them to succeed.

Ross has been married to his wife Kelly, a teacher, since 1992, and they have two daughters: Ashley and Alexandra.

Ross enjoys hiking, biking, skiing and snowshoeing with his family. He is also an avid runner and has competed in 10 km road races and half marathons. He completed his first full marathon in 2014.