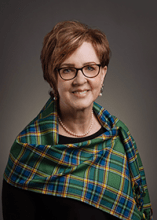 Sandy Blue was elected as an Abbotsford City Councillor in 2014. Born in Montreal, and raised on Vancouver Island, Sandy’s career took her from Victoria to Nanaimo and Terrace (where she met her husband Bob); and finally to Burnaby where they lived until moving to Abbotsford in 2000.

Sandy has a proven record helping communities flourish. In addition to winning numerous awards for her leadership in economic development, her track record makes her a sought after speaker on topics of economic development, community revitalization, and on strategies to help agriculture and tourism sectors thrive.

Her 25 year career with BC TEL / TELUS began as an on-call operator before moving to senior roles in Customer Service, Marketing, Advertising and Sales. In 2000 Sandy moved to HSBC Bank Canada where she managed their Advertising, Marketing, Sponsorship and Brand for six years. In 2006 Sandy was an instrumental part of the team that put Abbotsford International Airport (YXX) on the map, helping it to expand, bring new jobs and give Abbotsford citizens more direct access to the world. In 2008 she joined the City of Maple Ridge - the ‘2010 – 2015 #5 Top Canadian Investment City’ - as Manager Strategic Economic Initiatives.

As a Councillor, she brings all of this experience to the City of Abbotsford.

With all its assets and geographic location as a hub of the Fraser Valley, Sandy believes that Abbotsford should be a preferred destination for families and businesses. Simply put, it will take a lot of work - supporting existing business while attracting investment to create high value local jobs; and leveraging strategic assets like the airport, hospital, university and border crossings, as well as our thriving agricultural and aerospace economies.

“In my view there has never been a better time to be in Abbotsford. From our award winning Official Community Plan that provides the framework for our city to grow to 200,000 population; to the Master Plans that provide the detail about how that growth will occur – this is a once in a lifetime opportunity to shape the future of our city for generations to come. It’s exciting to be part of one of the most multicultural, economically diverse and fastest growing cities in BC.”

She’s committed to doing her part helping Abbotsford become the City it can be, because she too calls it home. “Together we are becoming the preferred destination for families and businesses; working together with council colleagues and staff we can create a welcoming environment in which the private sector can thrive - further establishing Abbotsford as the economic hub of the Fraser Valley.”

Sandy and Bob have 3 adult sons and 7 grandchildren. Along with her volunteering, Sandy’s hobbies include cooking, gardening and golf.

Committees and Community Groups (Past and Current)