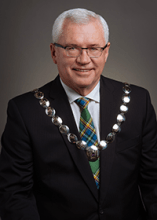 Henry has been an Abbotsford resident for practically his entire life and was the co-owner, president and CEO of Abbotsford-based Pacific Northern Rail Contractors Corp until his retirement in 2003. Henry was also involved with companies that developed and owned commercial, industrial and residential income-producing real estate properties. As a long-time Abbotsford businessman, he is enjoying the opportunity to put his years of business experience to work for the City of Abbotsford and its residents.

Henry is a champion for the City of Abbotsford. He is a strategic thinker and exemplifies this as Mayor with a deliberate plan focusing on Abbotsford as the Hub of the Fraser Valley, composed of four integral cornerstones: vibrant economy, fiscal discipline, organizational alignment and complete community.

Henry is proud of his own community of family members that includes Velma, his wife for 50 years, their three children, and their seven amazing grandchildren. His family is his inspiration for making sure Abbotsford remains a wonderful place in which to grow up and grow old, well into the future.